PSA for K-Pop fans: Get a chance to watch EXO live in Manila with Globe!
The “Kings of K-Pop” are returning for another concert on April 28, 2018 at SM MOA Arena—and Globe is giving away tickets. Details here.
Fun Stuff | By Trixie Reyna on April 12, 2018

Full disclosure: I’m not a K-Pop fan. The extent of my love for things Korean includes just a handful of Koreanovelas, Korean beauty products (especially face masks), soju, and of course Korean food (which I can eat everyday). However, I know a lot of my friends (and readers) are K-Pop obsessed, so I’m posting this announcement for them.

If you’re reading this, you probably already know who EXO is, but in case you don’t, EXO is considered the “biggest boy band in the world” and the “Kings of K-Pop” with their chart-topping hits, well-attended concerts, and multiple awards. EXO is known for their diverse range of music, covering pop, hip-hop, R&B, and EDM. Their first album XOXO was released in 2013 to critical and commercial success, selling over one million copies. Their subsequent albums EXODUS, Ex’Act, and The War received similar acclaim. 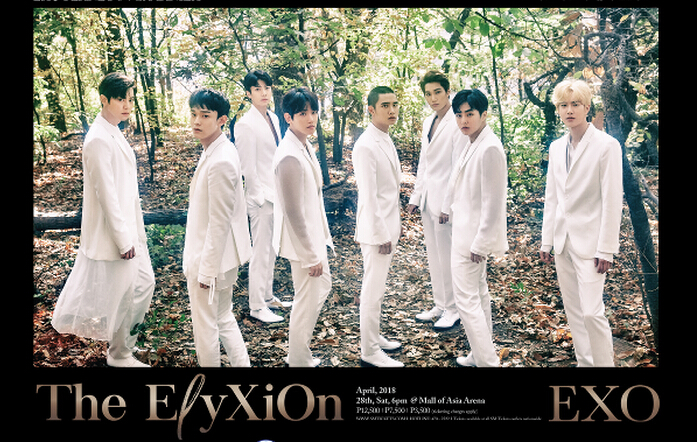 Following a two-day sold-out concert in Manila in 2016, the South Korean-Chinese boy band will be back on April 28, 2018 for EXO PLANET #4: The ElyXiOn at the SM Mall of Asia (MOA) Arena.

Fans of EXO can get the chance to see Xiumin, Suho, Lay, Baekhyun, Chen, Chanyeol, D.O., Kai, and Sehun live because Globe is giving away tickets to 12 lucky customers! Globe has been behind many of the premier Korean pop concerts featuring top K-Pop acts including EXO, BTS, and BIGBANG, in partnership with PULP Live World.

Prepaid and TM customers are eligible to join as long as they are subscribed to any GoWATCH variant from now until April 23, 2018. Every P5 of the GoWATCH promo availed will earn one raffle entry.

To join, customers must register by texting EXOREG <Name/Address/Birthyear> to 2346. Customers can also check their number of raffle entries by texting EXOPTS to 2346.

A total of 12 winners will be given one VIP Power ticket each. Winners will be announced on April 24 via text and on the Globe website, as well as its official Facebook and Twitter accounts.

In 2016, Globe and PULP Live World brought EXO’s first-ever concert to the Philippines, Exo Planet 2: The Exo’luxion. Due to insistent public demand, the sold-out concert was extended to two days, and they consequently made history as the first K-Pop group to hold two consecutive performances in the country.

For more information, visit the website, call the Globe hotline at 730-1010, visit any Globe Store, or text EXOHELP to 2346.

Did you enjoy this story or find it helpful? Get updated on my latest blog posts; like my page on Facebook and follow me on Instagram.
Tags:
boy bandconcertEXOfreebieGlobeGlobe TelecomGoWatchK-PopKoreanKorean boy bandpromoraffleSM Mall of Asia ArenaSM MOA Arena
Click to add or view comments!