The Brewery At The Palace: Cheers to the New Year with freshly brewed beer & topnotch comfort food
I found my chill spot in the hottest nightout complex in town. Here's my food & beer review.
Featured | Food | By Trixie Reyna on December 30, 2015 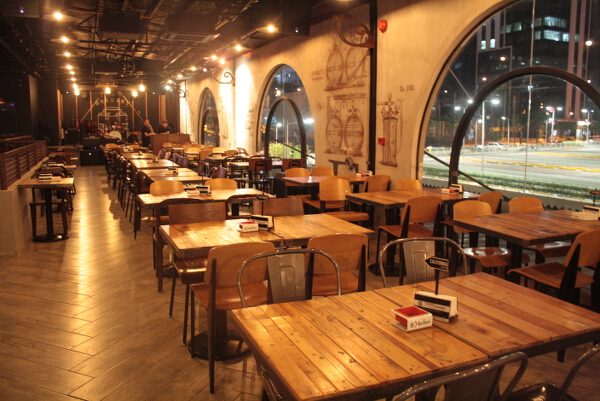 Dining area where the band plays at the second floor

The Palace in Uptown Bonifacio Global City is the go-to place for all partyphiles, with its many nightspots in one building. However, most nights, I’m really not up for partying. When I want to go out at night, I prefer to go someplace where I can just get a buzz and indulge in comfort food. And I am also always on the lookout for spots where I can bring my beer-loving boyfriend. Good thing we found our corner: The Brewery at the Palace. 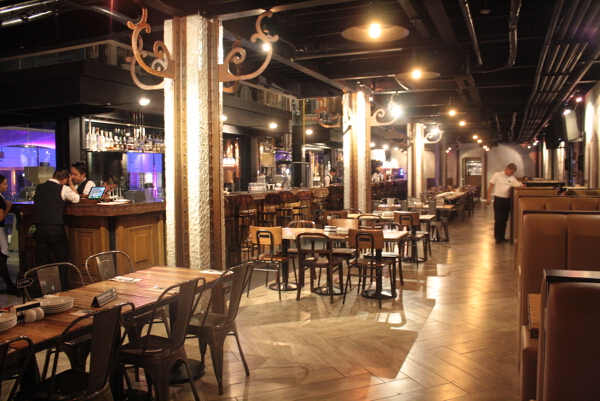 Main dining are and bar at the ground floor

One of my new favorite places to drink and dine in BGC, this microbrewery and restaurant is where we can chill out while sipping beer and enjoying such delicious comfort food you would keep coming back for. If you want to avoid the clubbing scene, this might be your preferred spot for New Year’s Eve (they’re open from 6PM to 6AM), New Year’s Day (1PM to 2AM), and any day you have something to celebrate with your best buds. There’s a band that plays every night at the second level of the restaurant: local indie acts on Monday, Wednesday, and Thursday; cover bands on Friday and Saturday. 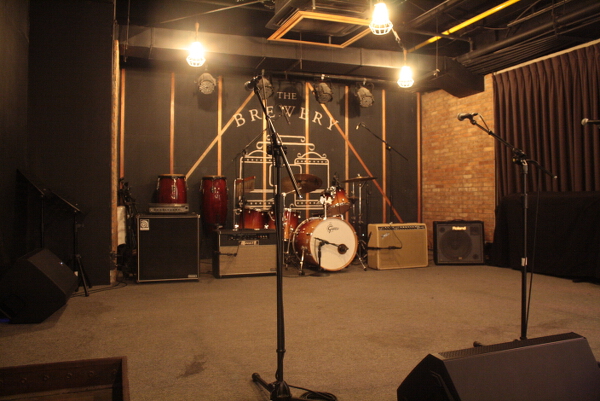 They’re a microbrewery because they brew their own beers, right there. The beer lovers behind Draft and Distillery, known for importing the best beers, finally came up with their own brews: the freshest beer for Philippine beer drinkers, with ingredients that include a wide selection of malt, different classes of hops, and a wide spectrum of yeasts across the world, then brewed in kegs using equipment they brought in from Austria. You can actually see where they make the beer, right above the bar. 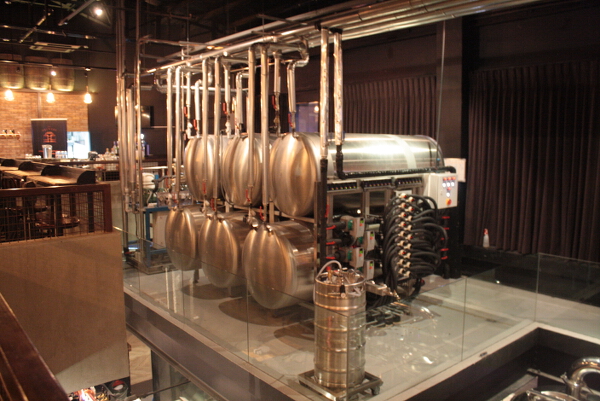 They only serve fresh beer—unpasteurized and unfiltered beer poured directly from the holding tanks—nothing bottled. They offer four classics and special beers that change each season. 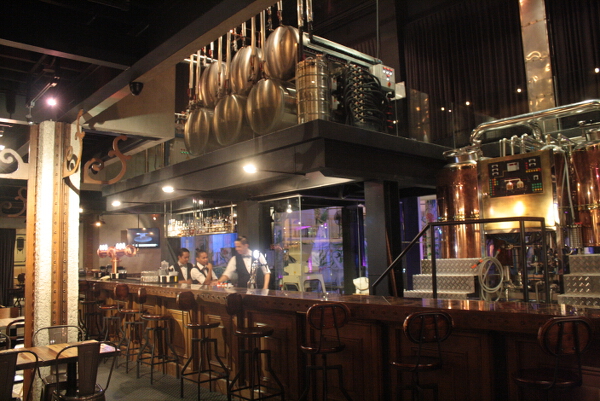 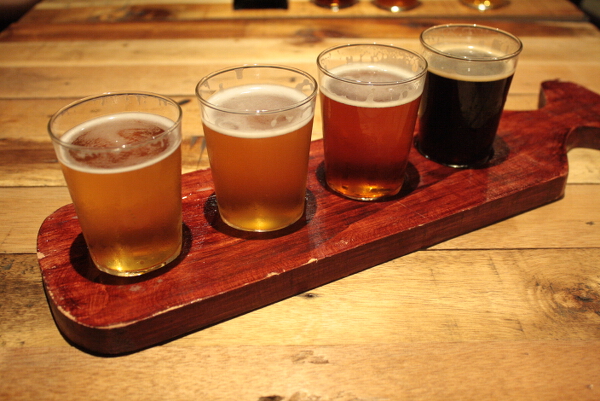 You can get a sampler of all four classics in a Beer Flight (P280 for four 100ml glasses). Meanwhile, if you can’t commit to that much beer and want to just sample beers, you can just get a single beer sampler (100ml) of any variant for P80.

Pilsner (P180 for 300ml and P250 for 500ml) is the lightest beer of all with the lowest alcohol content. It has a very light, clear color, from pale to golden yellow, a malty body, and a smooth but strong bitter end. It’s crisp, fresh, easiest to drink, and refreshing. Try it with lemon.
Best paired with: Fatty food, like Brewery’s Pork Chop and Salpicao (read on for my review of these), as it cleanses the palate. 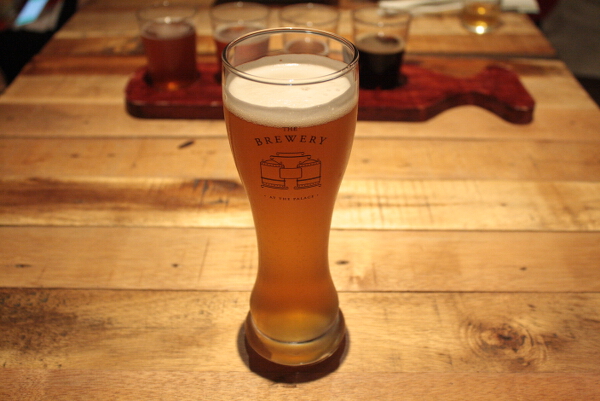 Weissbier (P200 for 300ml and P280 for 500ml), also known as wheat beer, is particularly noted for its low bitterness and relatively high carbonation. It is known to have a banana and clove-like taste because of one of its ingredients, German yeast. The beer is very cloudy due to the suspension of yeast. Light, acidic, fruity, and easy to enjoy with its bursts of sweetness, this is my favorite among their classics.
Best paired with: Fresh, light food, like seafood and salad.

IPA (P220 for 300ml and P310 for 500ml) stands for India Pale Ale. It’s a brown ale, with color that ranges from amber to copper, with a fruity-floral smell, yet a dry and bitter taste that’s popular among the men.
Best paired with: Spicy food. 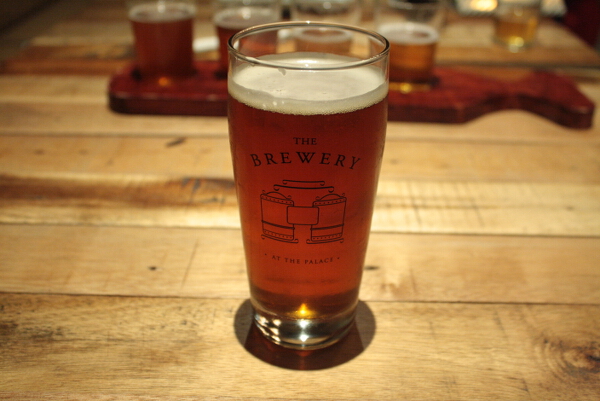 Stout (P210 for 300ml and P290 for 500ml) is dark in color, almost black, and features a heavily roasted flavor, achieved by brewing part of the malt that has been kilned and roasted, just like how coffee beans are. And, it does carry hints of coffee and chocolate—rich, full-bodied, dry, bitter, and smoky—and has a grainy texture.
Best paired with: Anything grilled and their Pork Chop. 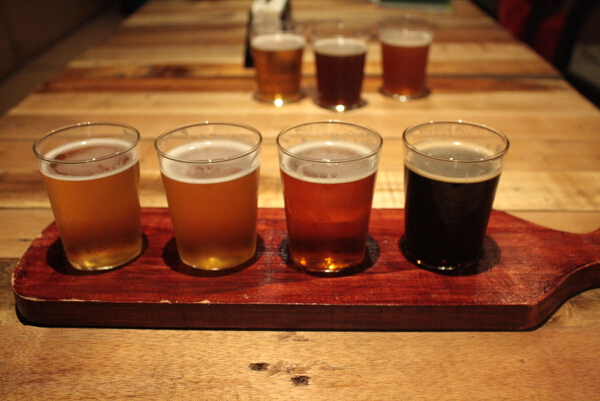 Ginger Ale (P200 for 300ml). This top fermented beer is infused with fresh locally sourced ginger. It is golden in color and has a distinctive aroma of floral and citrus. It has a malty body and a very pleasant ginger finish; you can really smell and taste the local ginger. It’s light and not too sweet.

Smokey Oakey (P240 for 300ml and P310 for 500ml) is a well balanced beer matured in oak from whiskey barrels; it really has a smoky whiskey aftertaste. It has a full malty body with a slightly roasted caramel taste and shades of orange peel, with a pleasant vanilla and sweet wood aromas. Naturally, the dark brown ale has hints of sweetness that I really enjoyed. It’s great to pair with grilled food and dark meat.

Christmas Bock. This German-style brew is typically enjoyed on special occasions like Christmas, Easter, and the coming of spring. It does smell like Christmas spices—like gingerbread. It’s slightly sweet, fruity, unique, festive—perfect for the holidays! With 7.5% alcohol, it’s their strongest brew. It has a copper color and made with six kinds of spices with bold flavors that include juniper berries, clove, star anise, and cinnamon. They made 700L of it in a tank, so it’s available while supplies last.

3 must-try pub grub to pair with their beers 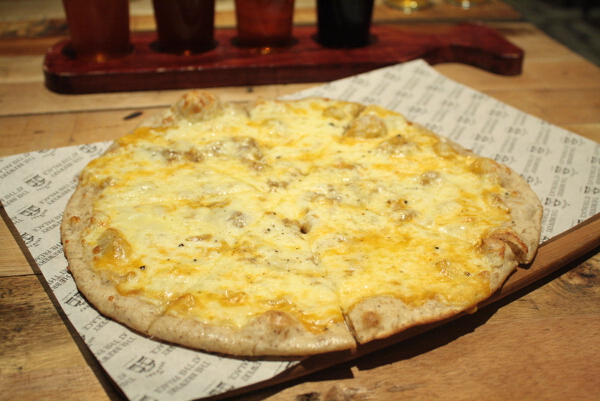 Brewery has a selection of 12-inch pizzas, all made of hand-rolled spent grain and beer dough. I tried the Microbrewery Beer Cheese Pizza (P420), made of home-made beer cheese sauce, mozzarella, parmesan, gruyere, and caramelized onions. It has all things I love in one pizza: beer flavour, types of cheese I like, a subtle sweetness, and a super thin crust. It’s one of the best cheese pizzas I’ve ever tried! It’s creamy and cheesy—oh, the smell!—and there’s an earthy taste and texture to the crust because of the mix of spent barley and wheat grains not used in the brewing process, mashed together. Its interesting grainy texture is like that of multigrain crackers. 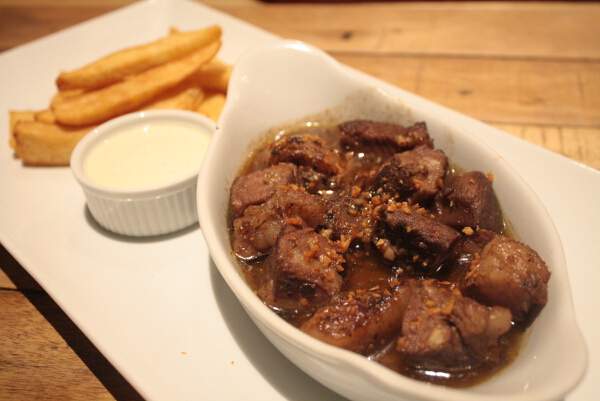 For pica-pica, try their Salpicao Sous Vide (P450), made of US Angus Beef Chuck with fried garlic bits, butter, chives, and finished with pork crackling. I love salpicao and they did not disappoint; it’s so good! The generous portion of meat is super tender and juicy, savory, and flavorful. It’s served with a side of Steak Cut Fries (P150 when ordered as an add-on), with delicious aioli dip. The big slices of potatoes are flavorful and not too oily—definitely comfort food material. 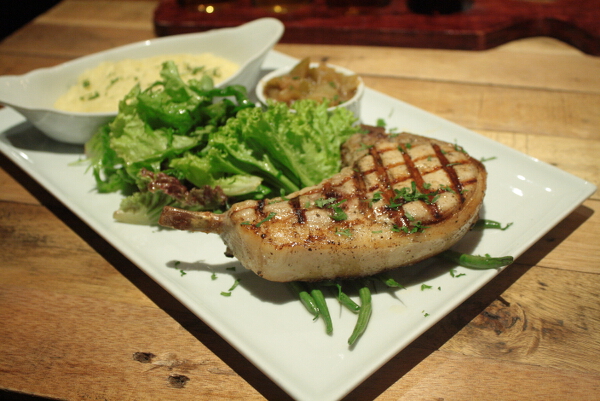 For mains, you have to try their Pork Chop (P580), brined for 24 hours, then served with apple and onion gravy. The juicy, full-flavored meat was served medium, and the cut is so thick, so it’s sulit. It comes with one side dish, and we chose Mashed Potatoes (P150 when ordered as an add-on), which is similar to but even better than the one served at Draft—and to think we like that one already! It has great taste and texture as it’s mashed well. 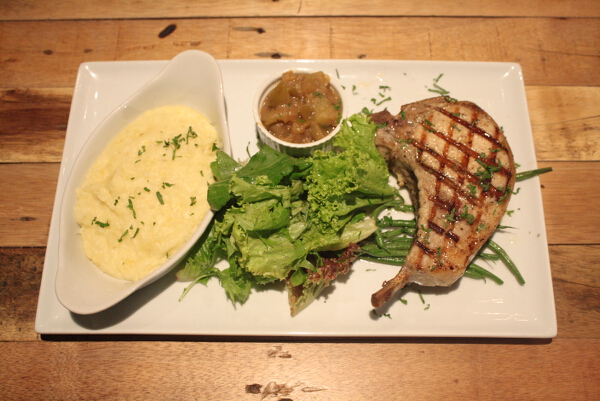 Now you know where to go when you just need a drink and want to eat your feelings.