So, what food do you like to eat when you’re chugging your favorite beer? I’m sure a lot of you will answer “everything,” and I’d be inclined to agree, but allow me to narrow down my favorites: Grilled cheese sandwiches, huge burgers, steak, and buffalo wings are definitely among them.

I’m more of a wine and cocktail drinker, but when I do drink beer—which I think goes best with sinfully oily food—I tend to go with Stella Artois or Hoegaarden, because I love the smooth texture, light taste, and refreshing flavor that go with any dish and do not overwhelm your palate. 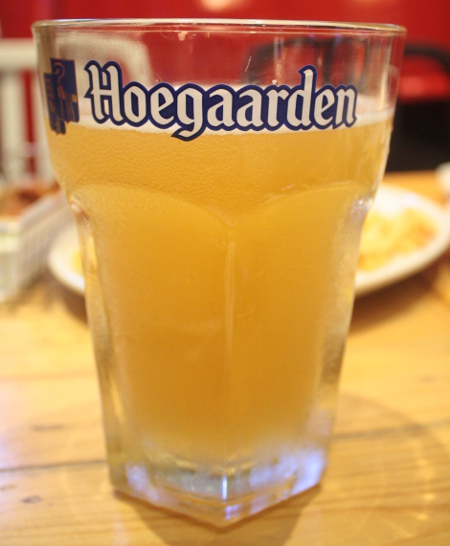 That being said, it’s always great to find new spots that serve good beer and great food—especially when they’re reasonably priced. My recent discovery is Brew Haus Pub & Eatery in Venice Piazza at McKinley Hill (where Off The Grid used to be). Called “Little Draft” by some patrons, it’s actually created by the same group behind Draft and opened in November 2014. You’ll notice certain similarities in the dishes and drinks, especially if you’re a loyal patron of Draft, but you’ll find a lot of new things to enjoy in Brew Haus.

For one, the drinks are a little cheaper. Here you can get a pint of Hoegaarden for P280, whereas in Draft it’s P295. This is actually what I immediately told my brother who’s a regular at Draft precisely for his Hoegaarden fix. But, like Draft, Brew Haus offers a wide selection of beers—74 kinds, in fact! 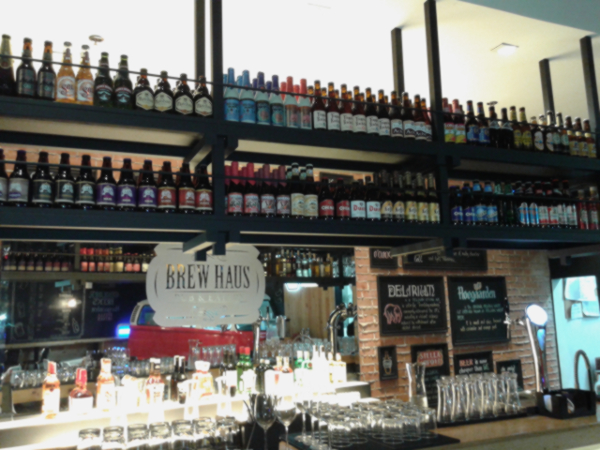 Another difference lies in the interiors. While Draft has a masculine, frat house feel, Brew Haus has a more laid-back hangout vibe. A Microbus serves as the facade of their semi-open kitchen underneath a chalkboard wall on which the menu is written. Simple wooden tables and basic black and white metal chairs set the casual ambiance. Setting the tone (and, I guess, the age group who will enjoy it here most, ahem) is ‘90s music: senti RnB in the afternoon and hip-hop at night. 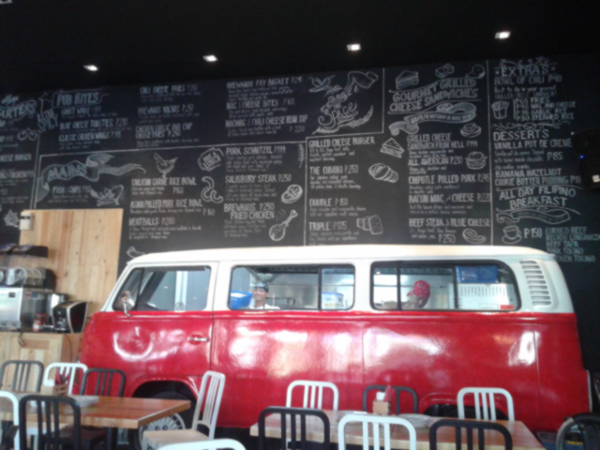 The third main difference is in the menu. Brew Haus is definitely a place where you can drink on the cheap and order affordable comfort food, with most items below P300. And, among the menu items they’re particularly proud of is their wide selection of Gourmet Grilled Cheese Sandwiches.

Yes, you read that right: They don’t just have one grilled cheese sandwich on the menu, they have nine—which differ in add-ons and types of cheese used. All the sandwiches, however, are served with perfectly cooked, golden, almost crispy (but not too much) French fries that are comparable to one of my favorite hangover snacks: McDonald’s French fries!

(If you want to tone down the guilt, you may request to have your grilled cheese sandwich in multigrain or wheat bread for an additional P15.)

Read on for the three Gourmet Grilled Cheese Sandwiches I tried, along with three other bestselling menu items that all paired well with Hoegaarden. 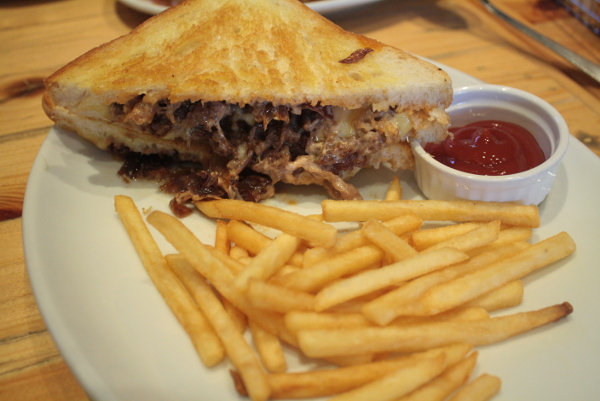 Made with heaps of juicy, grilled US Angus beef, oozing melted bleu cheese, and onion jam that gave it a somewhat sweet barbecue flavor, this is one of my favorites on the menu. It kind of reminded me of a good pulled pork sandwich, actually, but with a generous helping of cheese and in buttery slices of bread that made it taste even more delightful. Pulled pork and a light beer like Hoegaarden go well together, so this pairing makes sense, too. 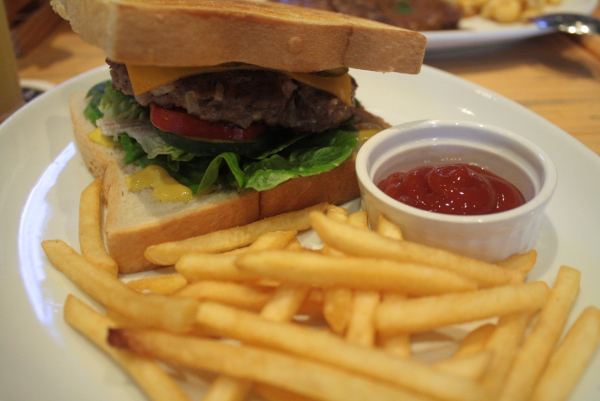 They didn’t have an outright burger on the menu, but this one definitely comes close, as it consists of a juicy and flavourful 1/3lb US Angus beef patty, tomatoes, lettuce, pickled cucumbers, mustard dressing, and oozing melted cheese. Instead of a bun, all the burger elements are sandwiched in two buttered bread slices. The buttery bread actually made it taste more deliciously sinful than it already is. Pairing this with beer is a no-brainer! 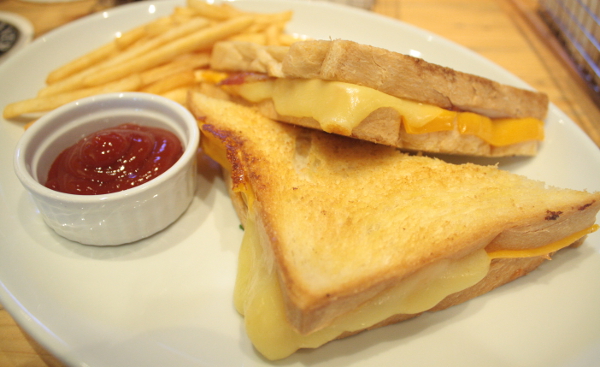 If there’s anything more sinful than their Grilled Cheese Burger, it’s probably this sandwich, which made my eyes widen in anticipation the moment I saw it on the menu. Yes, it’s exactly what you think: lightly salted bacon strips with a little bit of mayo and bits of al dente macaroni and cheese sandwiched by the same buttery bread I’ve grown to love. It’s not as overwhelming as you think it is, don’t worry. 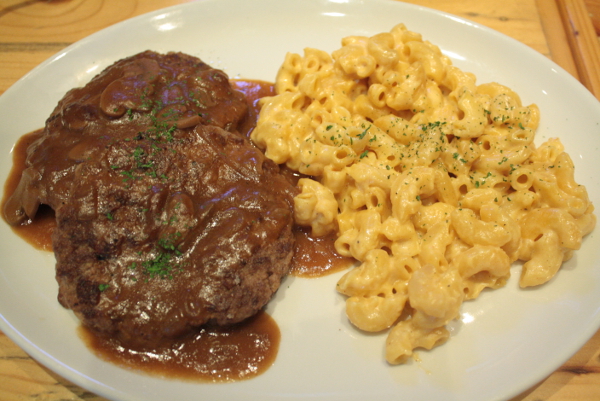 If you’re not big on grilled cheese sandwiches with beer, just order one of their mains. I tried the Salisbury Steak, which I also had with their house mac and cheese to certify its comfort food status. (You do have the option to have it served with steamed rice instead.) It went so well with the two quarter-pound tender US Angus beef patties smothered in light-tasting mushroom gravy–and, of course, the light-flavored Hoegaarden. 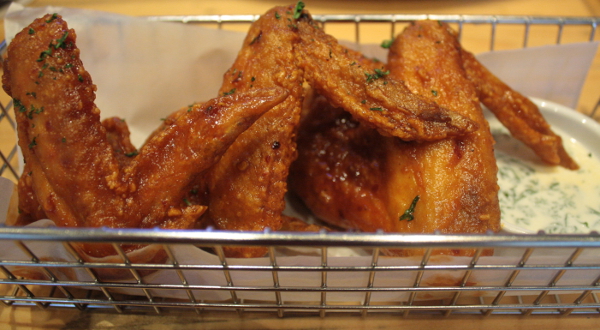 When enjoying beer, of course you can’t go wrong with pairing it with classic wings that have a good balance of spicy, sour, and sweet flavors. I’m glad they offer big wings that are cooked well (read: not dry). 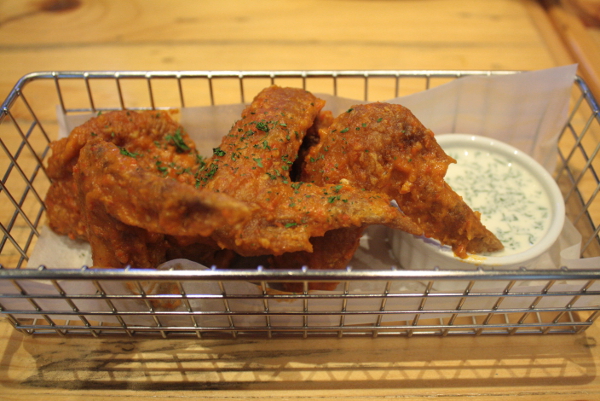 On a dare, I also tried what Brew Haus claims to be the spiciest wings in town. I wouldn’t know if this claim is true because I haven’t really gone sampling spicy wings around town, as I tend to shy away from food that give too much heat, but since I was dared (I even had to sign a waiver, yikes), I went ahead and tried it. It IS indeed super spicy. The Brew Haus crew said their secret recipe includes LOTS of siling labuyo, which actually has a really intense bite. I must say, in spite of the harsh spiciness, the wings are rather tender, so they’re easier to eat somehow. Whew. I only had around three or four bites of that one before I gave up. I’m glad I had a pint of Hoegaarden ready to soothe the tongue burn. I sure saved this for last.