5 Bacardi-based cocktails from 5 of Manila’s top bartenders
We sampled the concoctions of the Manila finalists of Bacardi Legacy Cocktail Competition 2017.
Food | By Trixie Reyna on March 3, 2017

Did you know that some of the most well-loved cocktails today—the Cuba Libre, Daiquiri, Piña Colada, and my favorite Mojito—were all inspired by the taste of Bacardi, one of the world’s most popular rum brands? These drinks have grown so much in popularity that you’d be hard pressed to find anyone (who drinks) who hasn’t ordered or tried it.

Wouldn’t it be great if the next rum-based classic cocktail originated from the Philippines? 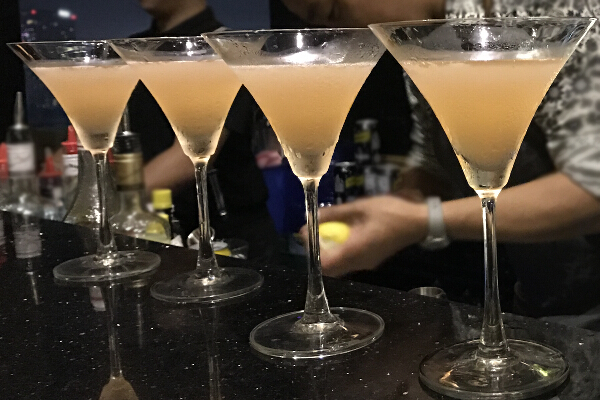 Bacardi is giving bartenders an opportunity to bring their unique cocktails to the same level of infamy with the Bacardi Legacy Cocktail Competition, one of the most prominent and prestigious bartender challenges worldwide. This year, five of Manila’s top bartenders will compete for a chance to represent the country in the 8th edition of the competition. This is only the second time the Philippines will send a representative; the first time was last year.

The challenge? To create a cocktail that’s balanced, refreshing, appealing, and will stand the test of time as part of the Bacardi Cocktail Legacy, alongside classics such as The Original Bacardi Daiquiri and The Original Bacardi Mojito. It should be simple yet good, and can be easily replicated anywhere in the world. 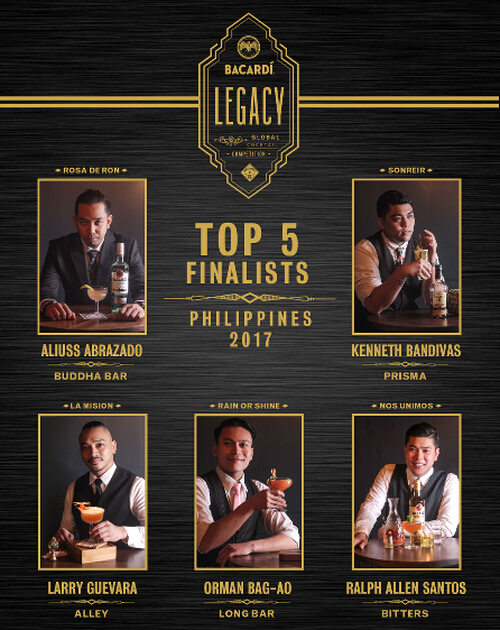 Stepping up to task are Aliuss Abrazado from Buddha Bar with his creation, Rosa de Ron; Kenneth Bandivas from Prisma and ABV featuring Sonreir; Larry Guevara from Alley and his cocktail La Mision; Orman Bag-ao from Long Bar, with Rain or Shine; and Ralph Allen Santos from Bitters, featuring Nos Unimos.

We got to try each of these cocktails during a unique bar crawl, wherein these bartenders were taken out of their comfort zones, AKA the respective bars where they work, to create their competing concoctions for the public in an entirely different bar. Bacardi chose different bars around Makati: Aliuss made his Rosa de Ron at The Penthouse 8747 along Paseo, Kenneth mixed Sonreir at the new OTO Bar in Poblacion, Larry entertained us with La Mision in Bar Mathilde along Kalayaan, Orman let us try Rain or Shine at The Curator in Salcedo, and Ralph served us Nos Unimos at Exit Bar in Legaspi, all in one night.

Here’s what I learned about and think of each of them (listed below in order of how I tried them so you also know my level of sobriety at each stop). 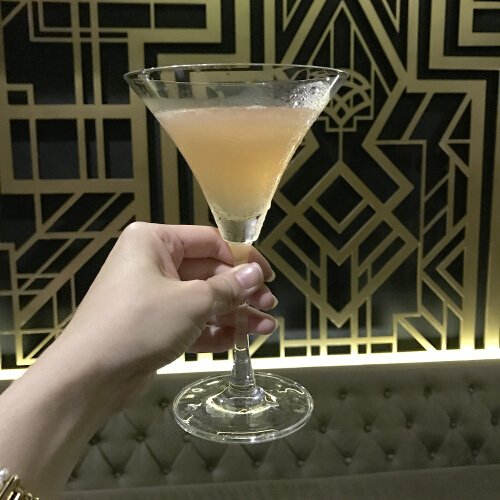 According to Aliuss, Rosa de Ron means “rose of rum,” a generic name: when you think of a flower, the first thing that comes to mind is rose; when you think of an alcoholic beverage, it’s rum. He says his drink is inspired by his personal hardships and made for those going through heartbreak. This delicious drink does leave one in higher spirits. It’s fruity, acidic, and sweet, but not overwhelmingly so. It’s a refreshing ladies’ drink, and I like how you really get a whiff of the rose aroma from the rose syrup he placed in the drink. It’s a strong cocktail, with Bacardi Superior as base. 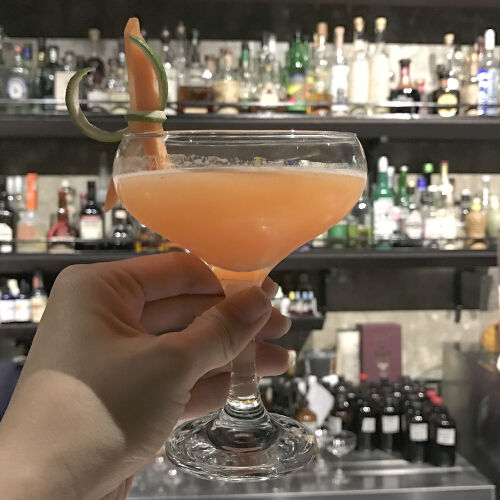 Next we tried Orman’s Rain or Shine, a name inspired by the ups and downs and struggles he had to go through in life, moving to Manila from Davao to pursue being a bartender unknown to his family. He says this drink is inspired by the Mojito: It has everything this classic cocktail has—lime, mint, sugar syrup, rum—except soda water, which in his drink he replaced with carrot and guava juice to lessen the acidity of lime, and the latter to add a touch of Davao. You can already order this drink yourself from Long Bar for P295. The drink is refreshing, sweet, and easy to drink, with a minty complex that will bring to mind the mojito. We call it “traydor” (traitor) because you can barely taste the alcohol, it’s sweet like juice, but you know it will hit you hard with that Bacardi Superior base. While I must admit it’s unlike the Mojito I know, I still like this drink as it is. 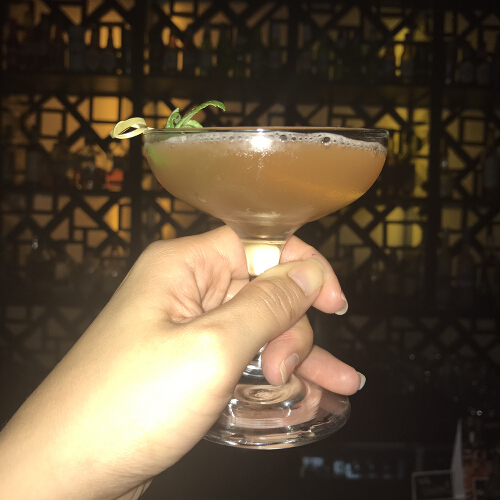 Then we move on to the next cocktail, Nos Unimos by Ralph, who says BLCC is the first bartending competition he has ever joined—and look, he already made it to the top five in Manila! “Nos Unimos” is said to be derived from the Spanish phrase “Mas Fuerte Nos Unimos,” or “The stronger we unite,” as his drink is inspired by his late mother who taught him and his siblings to stick together to surpass life’s challenges. His cocktail is definitely strong, thanks to Bacardi Gold, straightforward, and with a hind of acidity from the lime that dominates the palate for this drink. 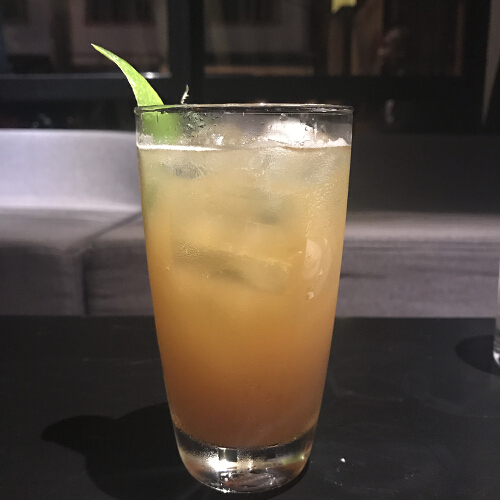 Already a little tipsy, we head to the busiest bar of the night, OTO Bar, a newly opened hidden joint in Poblacion, to try Kenneth’s Sonreir, which means “to smile” in Spanish. I love how this drink is served in a tall glass filled with ice—definitely a drink I can nurse the whole night (not that it would last very long when I’m the one drinking). The drink is heavily influenced by Filipino culture, Kenneth said, and is a tribute to the late Ray Buhen, one of the four Filipino bartenders who started the tiki renaissance in Los Angeles, hence the pineapple flavor. The pineapple definitely dominates the palate, along with the acidity of the lime. It’s not sweet and it’s refreshing, and you can really taste the strong Bacardi 8 Dark Rum in this drink. 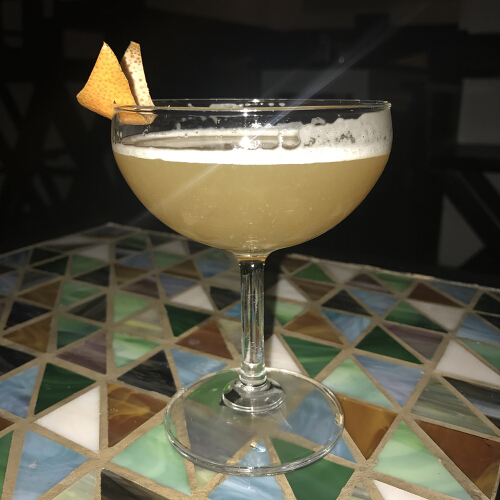 Our last cocktail for the night is La Mision, and by this time, we were definitely intoxicated—I didn’t even get to take notes! But I do remember that Larry entertained us with his antics and punch lines, which makes me think he’ll likely be a crowd favorite in the competition. His cocktail is good, too, and my second favorite of the night, after Rosa de Ron. With ingredients like fresh ruby grapefruit juice, fresh lemon juice, unsweetened pineapple juice, and black peppercorn syrup, you’d think you’re drinking a juice cleanse, but it’s a lot more fun with the presence of Bacardi 8!

For the record, I finished all five cocktails to the last drop. The last two, I could no longer hold for a clear snapshot.

These five cocktails will be showcased at the national competition on March 16 at Twelve Monkeys, where the winner will earn the coveted spot at the Global Bacardi Legacy Competition. The sole winner will represent the Philippines for a chance to best 39 other competing countries in the worldwide affair that will be held on May 18-24, in Berlin, Germany. Will the world’s #1 rum-based cocktail come from the Philippines this year? Let’s wait and see!

To see the Manila finalists and what’s in each of their cocktail entry, click through the slideshow below. That way, you know what to order next time you spot them behind the bar at your favorite hangout!

“These finalists…will now be put through the paces in front of a crowd that recognizes the importance of choosing a cocktail that reflects the legacy of Bacardi…a cocktail that will underscore creativity, talent, and passion for what they do—ultimately stamping their legacy alongside ours,” says Aurea Aguilar, Trade Marketing Manager & Bacardi Legacy Cocktail Competition Philippines Project Head.

The global winner will go around the world to present his or her cocktail at some of the finest bars in different countries, in an effort to make it the next classic Bacardi cocktail.

Did you enjoy this story or find it helpful? Get updated on my latest blog posts; like my page on Facebook and follow me on Instagram.
Tags:
alcoholic beveragesalcoholic drinksAlleyBacardiBacardi LegacyBacardi Legacy Cocktail Competitionbartenderbartendingbartending competitionBittersBuddha BarcocktailsCuba LibredaiquiriLong BarmojitoPrismarum
Click to add or view comments!